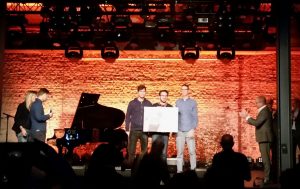 Belgian guitarist Tim Finoulst presents his first trio as a leader with Martijn Vanbuel on double bass and Daniel Jonkers on drums. These three musicians have already gained their stripes in the Belgian and international jazz scene, but in this line-up they find the right musical space for their individual expression. They get inspiration not only from jazz, as well from blues, folk and world music. In the melodic compositions by the hands of Tim and Martijn the story telling aspect is most prolific, hence their debut album is named ‘Narrative’, published by the label SoulFactory Records, know from the music of Tutu Puoane and Ewout Pierreux. This album was listed album of the week on the website Jazz in Belgium and got 5 stars in the magazine Jazzmozaïek. In June they released their follow-up album “Tender Machine” which features the wonderful Bert Joris. 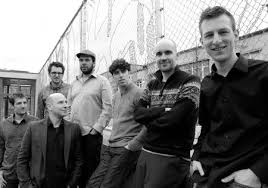 The Jelle Van Giel group, based in Belgium, is a ‘searching-for a-new-direction’ in jazz, crossing over from jazz into rock and classical music to deep African rhythms. It was founded in 2011 by Jelle who was searching for talented, exciting and driven musicians for his newest project. He wrote big and tight arrangements that take the listener on a musical adventure, still with a lot of space for every musician to express themselves and bring a story within a story, keeping it new and fresh all the time. The music is lyrical with a lot of underlying rhythmical power and cross-rhythms and has very interesting different kinds of instrumentation. The members of this septet, the future of the Belgium/European jazz scene, came together after a long time of playing in separate bands and formations in the Belgium/European jazz scene. They all blend perfectly together in this new band creating exciting music that everybody can listen to! 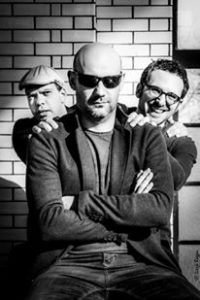 In Bocca al Lupo means literally in the mouth of the wolf, but in Italian language it is a saying for good
luck! Success is also the key word for this new trio
with Alano Gruarin on piano, Tim Finoulst on guitar and Carlo Nardozza on trumpet. These three musicians of Genk work together to play the most beautiful Italian hits from Ennio Moricone, Totto Cotugno, Nino Rossi, Albano and Romina and many others. Their debut album is titled Nostalgia.

TUTU PUOANE TALES BY THE MOONLIGHT 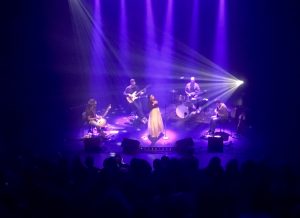